I picked up the Samsung Galaxy Nexus yesterday on a new 3-year contract with Bell for $169.00. You can also find them on eBay for as low as $600 today with overnight shipping from these Galaxy Nexus Smartphone sellers.

Coming from the HTC Nexus One and then the Samsung Nexus S, there are many things I love about the new Galaxy Nexus, and a few things that got me scratching my head and at times saying, “WTF?”.

This quick review is to talk about my 18-hour experience of transitioning from the Nexus S to the Galaxy Nexus and the things I’ve discovered. These are the same things you will discover when you first pick up and use the Galaxy Nexus with Ice Cream Sandwich (ICS), the Android 4.0 operating system supplied by Google for this device. 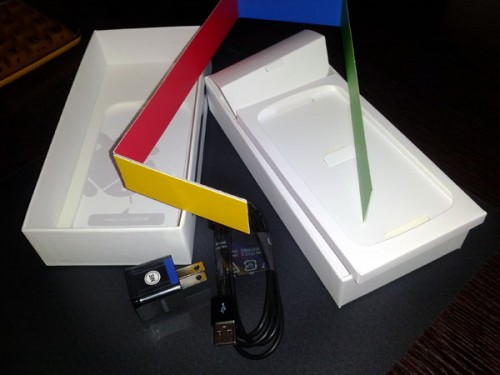 The packaging is a mess. Once you pull everything out of the box to get it up and running, you have a heap of cardboard and paper to deal with. But who cares, it’s a damn box. Into my closet it goes. 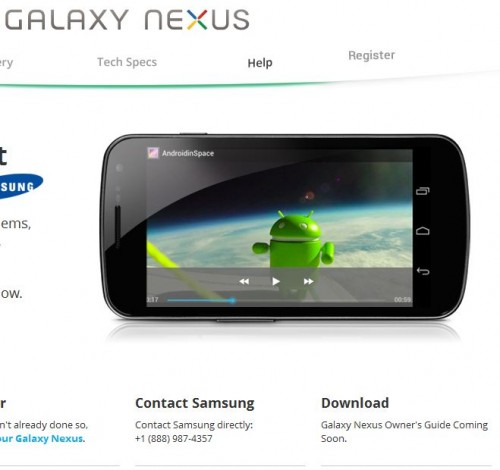 Do not make me laugh out loud (aka LOL) because if you have never used a smartphone before, consider signing up for Smartphone 101 classes. There is no user manual for the Galaxy Nexus. If you head over to the Google Galaxy Nexus website, you are greeted with a “Galaxy Nexus Owner’s Guide Coming Soon” text on the main page. Again, not something I’m going to cry about, but for first-time smartphone users, this is not a good introduction into the handheld computing world. Patience or a 12-year kid is needed for training.

While waiting line at Best Buy, two elderly customers came in asking for help on basic functions for the Galaxy Nexus that is now second nature to most of us. They had to be thought that these phones allow you to ‘swipe’ and ‘press-hold’ certain areas of the screen for more functions. The Best Buy employee trained them for 1.5 hours on how to use the phone. This would be funny, if it wasn’t sad. 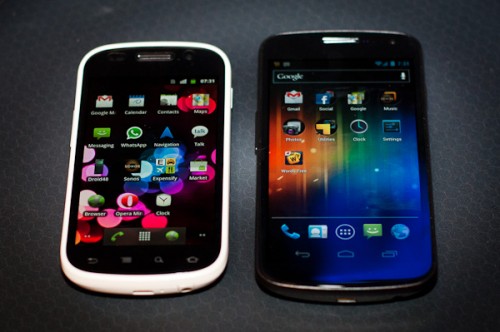 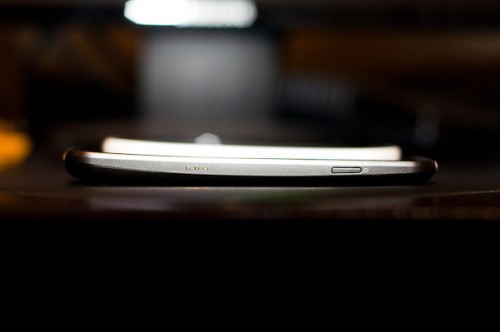 It is very big and very thin. Photo of the Galaxy Nexus placed beside the old Nexus S.

Now let’s cut to the chase and showcase the UI experience from a Nexus One/S owner to a Galaxy Nexus owner. Note that you can capture screenshots on the Galaxy Nexus by pressing the Power+Volume-Down button at the same time. Finally, a screen capture feature. 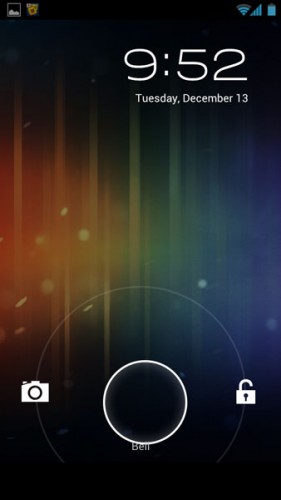 The lock screen allows you to Swipe-Left directly into the camera, or Swipe-Right to unlock the phone. For a photographer, the Swipe-Left directly into the camera is a much appreciated feature. I do miss the swipe feature to change volume to vibrate and wish Google added a Swipe-Up and Swipe-Down feature for users to customize additional swipe functions. 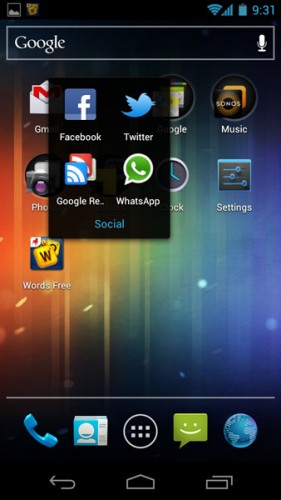 As applications are installed, they are automatically added to the desktop. Great idea, but can be annoying for some users. The desktop now supports folders and you set it up just like the iPhone, by dragging one icon onto the other. Tap on the space below the icons to give it custom name. 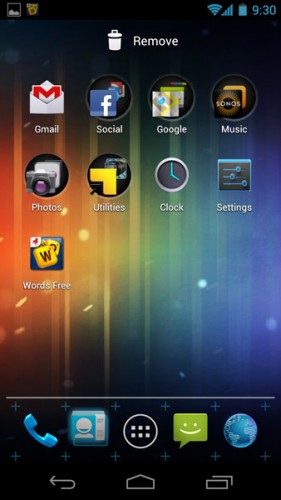 You can customize icons on the dock. Press-Hold an icon on the doc to get started. 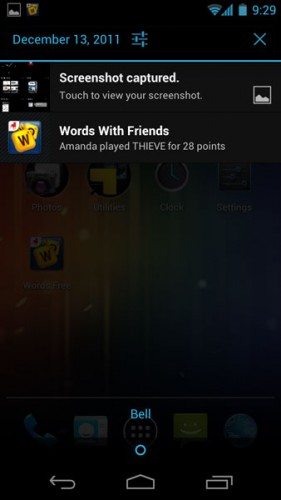 When pulled down, swipe on the notification row to get rid of individual notifications. This is a very nice addition and still better than the iOS design on my iPad.

The bottom of the Galaxy Nexus features a notification light that displays when there are unread notifications. I greatly missed this feature after leaving the Nexus One and this has caused me to lose many e-mails and SMS’s that had to be sent urgently. Now I am happy again. 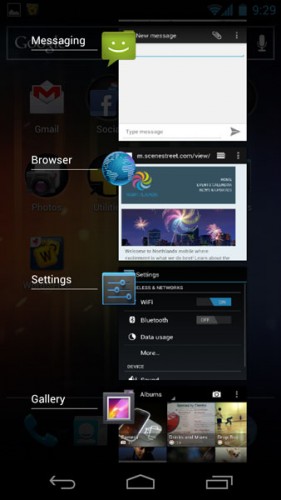 There is a dedicated multitask button on the bottom navigation row. Again, swipe on the running task to kill that task or click on it to open it. 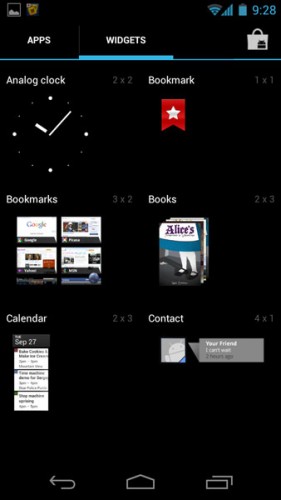 Gone is the old-fashioned way of Press-Holding on the desktop to add widgets. You can find widgets in the drawer by Swiping-Left to switch to the Widgets tab on the right side of the drawer.

Now here are some oddities with Ice Cream Sandwich that has left me scratching my head. There are (count them) THREE menu buttons to replace the ONE menu button Google took away from us. Depending on the app, the menu button can appear in any one of three locations. The menu appears as three vertical dots if a menu exists. 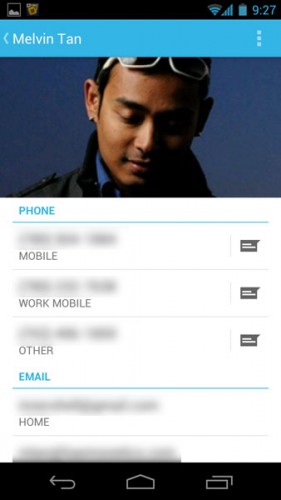 At the top of the application. 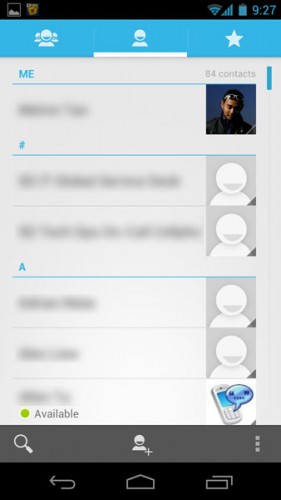 At the bottom of the application. 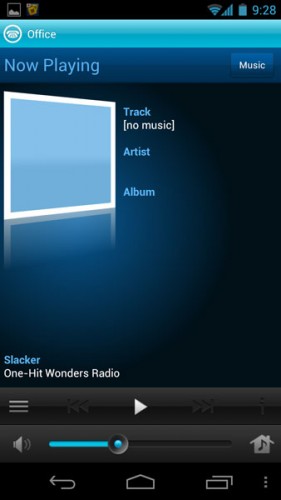 At the bottom-bottom of the application in the navigation row.

Google isn’t sure whether it wants to follow Microsoft’s Metro concept or go with the more traditional vertical scroll. So it decided to use both just to be sure. 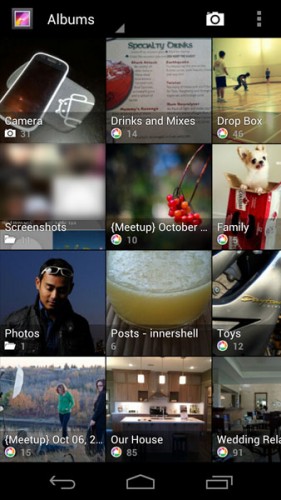 In the Images app, the tiles scroll horizontally and are cut-off in the Metro style. 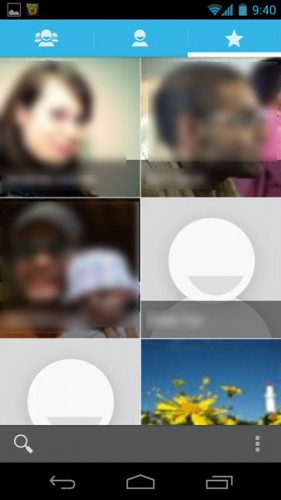 In the contacts, the tiles scroll vertically.

I was unable to transfer the photos from my Nexus S to the Galaxy Nexus initially. When I copied the photos into the DCIM/Camera folder, the copy process would hang on Windows and Mac. Later, I discovered that there was a permissions problem with the folder and the fix was to delete the DCIM/Camera folder and then recreate it. After that, images transferred without issues.

I am still waiting for these features to show up on Android:

Despite some of its trivial oversights, 98% of this phone is great and is the best smartphone I have ever owned. It is fast, it is big, and there is enough spacing between keys on the keyboard for me to type with high accuracy. I would buy this phone without hesitation. 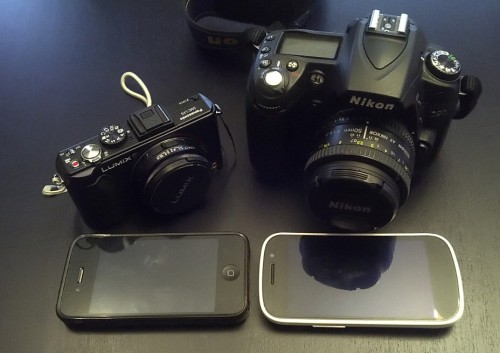 This article is going to be a variation of the “get out and shoot” theme, except with emphasis on your choice of camera (or lack of camera). When it comes to photography, I (usually) don’t care which camera I use as long as the picture or the moment is captured forever by something, anything. The quality of the photo, while important and gets you praise, is not always important. Capturing a rough photo with a camera, that barely qualifies as a camera, is better than not capturing anything at all and losing that moment forever. Even with a rough photo, you can still tell a wonderful story by adding a bit of narrative around it and sharing your experience with friends and families through Facebook or your blog. For this reason, I never waste an opportunity to capture a photo if it presents itself regardless of what camera gear I have on hand. For professional or paid work, using the best tool for your need is always a safe approach.

For my hobby, I use various different classes of cameras depending on what is most accessible and convenient for me at the time. My photography toolbox includes any one of the following cameras (some barely qualifying as a camera): 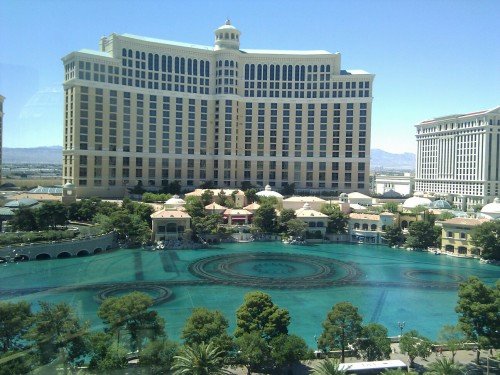 The Nexus S is my smartphone and it is always by my side. For photos that I want to quickly capture and post to FB or Twitter, this is my go-to tool. I don’t intend on doing any fancy post-processing with photos captured through my phone, but I make sure to take several pictures to ensure that the focus, color, and composition are technically correct. Just because I am using a smartphone, doesn’t mean I should be ignoring the rules of photography that would turn an OK photo into a great photo.

The above photo of the Bellagio was taken with my smartphone while having lunch at the Eiffel Tower Restaurant in Las Vegas. I wasn’t expecting to take any photos, so I didn’t bring my camera with me that day. 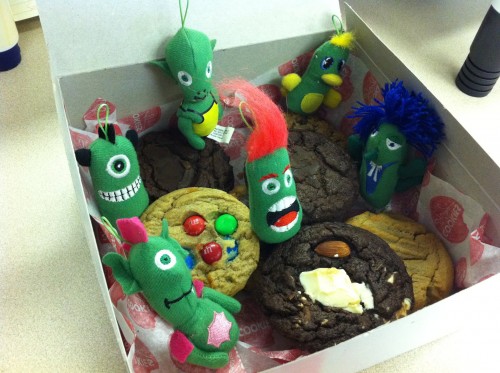 My wife uses an Apple iPhone 4 and there have been times where my own smartphone was not within reach or forgotten at home. Again, I won’t miss an opportunity to take a photo just because I didn’t bring my smartphone. Usually, I will steal my wife’s iPhone (which has a great camera by-the-way) and snap away. When back at home, I will e-mail the photos to myself and then wipe it off her phone (common courtesy).

Similarly, my wife has given up her Canon SD600 P&S camera since getting an iPhone. She herself enjoys photography, but don’t want to deal with the complexities of a high-end camera. Therefore, the phone works for her and she will often use it to capture the same scenes I do. The Panasonic LX-5 is a high-end point-and-shoot (P&S) camera I bought for using on vacations. After several vacations carrying a heavy DLSR system, lenses, and accessories I vowed to never carry over 15-pounds of camera equipment over my shoulder when on vacations anymore. Plus, instead of having a vacation and enjoying it, I was spending just as much time fiddling with the camera than I should have. So I looked for a high-end, compact camera that gives me great low-light capabilities and full manual control like my DSLR. The Panasonic LX-5 was compact, high-quality, and was up to the task. I have since taken this camera for all my vacations and captured well over 10,000 photos from all my trips. I also use this camera around town when there “might” be an opportunity to take a photo, but where I don’t want to bring my heavy DSLR with me. Finally, for everything else (and usually the last camera I reach for) I use the Nikon D90. This heavy camera is brought with me when I know I want to take quality photos at a pre-planned event, location, or date. This is always bring this to weddings and parties where I know low-light is going to be an issue. I am also an avid member of various photography clubs in Edmonton where I attend meetup events with this camera (plus my Panasonic LX-5 as backup).

There you have it. My photography kit is fairly plain and simple. I try not to complicate things or allow the type of equipment to get in the way of my hobby. Just use whatever you have at the time. Some of my best photos were taken on my smartphone, mainly because it was the only available tool at the time.

P.S. The feature photo for this post was taken with my work’s Blackberry Curve 9780. It was the only phone left in the house after the rest was staged for the photo needed in this article. 🙂