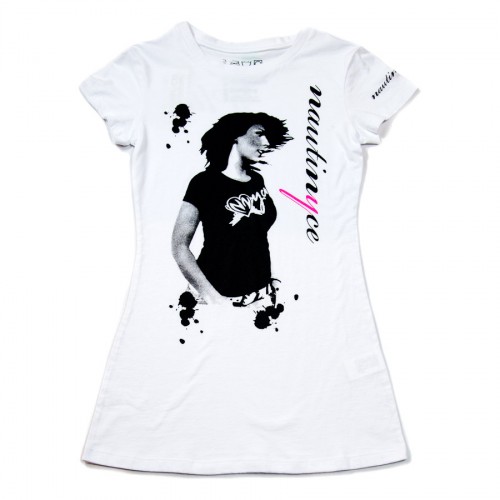 After my successful Bathroom Products Photography attempt, I was thinking of the next series of photos I could take using items found around the house. I needed a subject that would be colorful and bring lots of contrast to the photo. I decided that photographing my colorful t-shirts would give me exactly what I needed. So I went ahead and started planning how to do this to achieve a seamless white background. Coincidentally, a local business contacted me at the same time about wanting this type of commercial product photography. So I took the job to deliver 52 photos of t-shirts (front/back, male/female, six colors, four designs). Yeah, that is A LOT of shirts. Total time for the job including setup and post-production was 6 hours.

Setting Up for the Shot

The picture above shows my setup with two light sources that was required to achieve the effect I was going for. The shoot-through umbrella was used to produce a soft light on the t-shirt, while the reflective umbrella was used to give the t-shirt harsh shadows along the outside edge. I felt that the harsh shadows would give the t-shirts a little bit of depth and help separate it from the seamless white background, which was especially important when dealing with the white t-shirts.

The backdrop was two layers of bed sheet covers purchased from Zellers at 140 and 180 thread count, respectively. The sheet covers were stretched over our old wooden dining table and then held in place with thumbtacks. I ensured that there were no wrinkles on the sheets that would introduce ugly shadows into my final photo. On hindsight, I could have used a nylon shower curtain instead which would have been easier to manage.

I think this shoot was a success. In addition to the seamless white backgrounds, the client also requested magazine-style layout of 4 popular t-shirts on a 15% gray background. Except for the magazine style layouts being created in Photoshop, the rest of the images were all processed in Lightroom.

All photos Copyright by Nautinyce Clothing Inc. who commissioned this project.